The way farmers have made farmhouse Cheshire cheese has altered little over the years.  A friend (and former ADAS colleague of mine), Sarah Lunt (née Walley) recently lent me a wonderful book.

This photo album was made for her father (Edward Walley), and shows how farmhouse Cheshire cheese was made at Lighteach Farm (near Prees in Shropshire). On the cover it says 1942, but we believe it to be 1952, after the milking parlour was installed in 1949 and they also changed to a Friesian herd.

It's a wonderful insight into farmhouse cheese making.

The first picture shows the cows in the collecting yard, ready for milking: 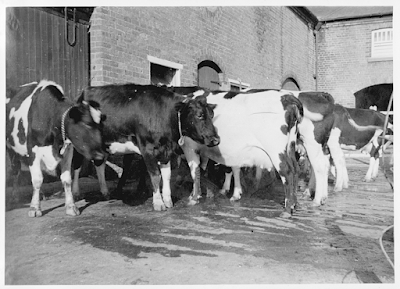 The next picture shows Michael Faulkner, milking the cows: 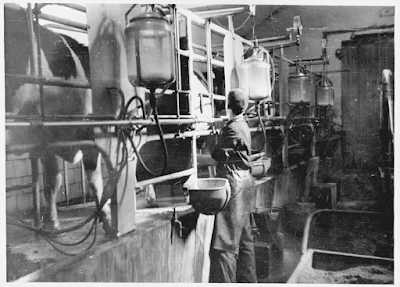 The milk passes through control jars and a sieve: 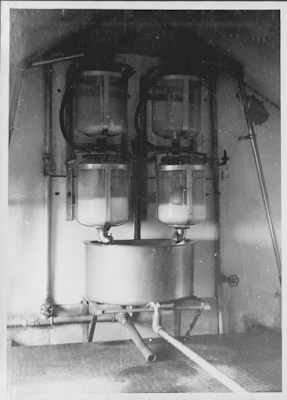 through a pipeline to the dairy.  Farmhouse cheese making is a curious mixture of art and science. The next picture show us Joan testing the milk before setting: 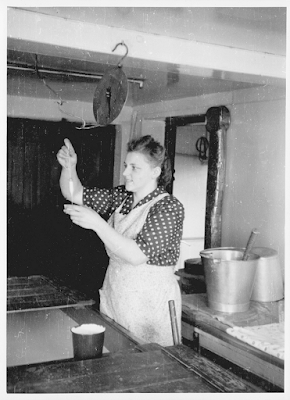 In the next step, Joan stirs in the rennet: 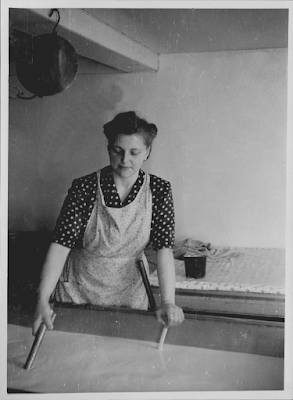 The cheese was then tested before cutting: 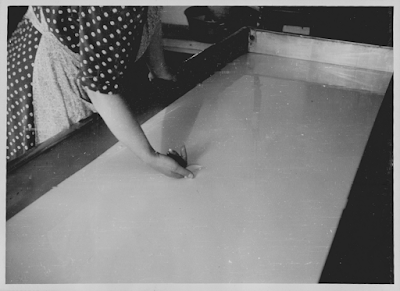 In the next picture, Joan is cutting the curds with an American curd knife: 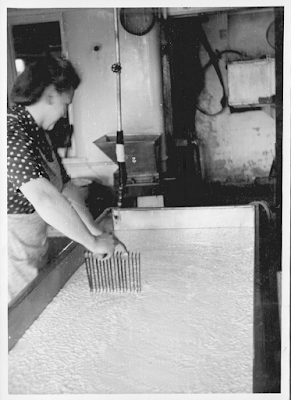 the next photo shows Auntie Rye stirring the cheese: 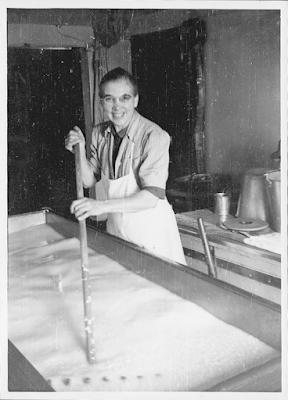 and Joan weighing the salt: 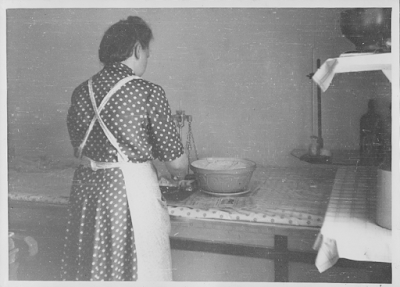 before adding it to the cheese. Then Joan tests the whey with an acidimeter: 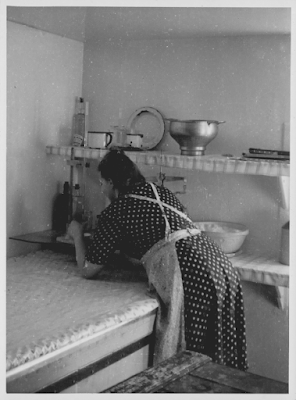 Then Aunty Rye drains off the whey: 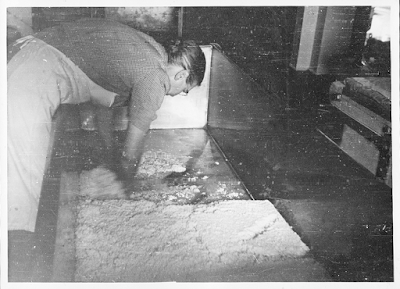 In the next picture we can see Aunty Rye breaking and turning the curd: 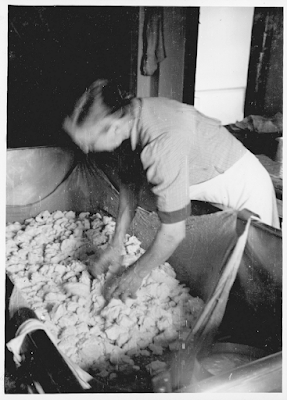 In the next picture we can see Marjorie Hewitt grinding the curd: and then Auntie Rye puts the curd into cheese moulds: 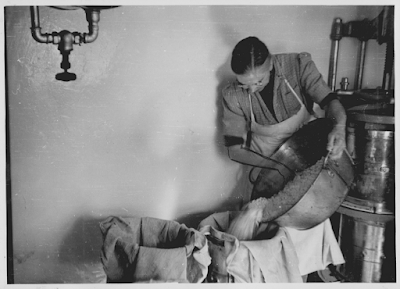 The cream is then separated from the whey: 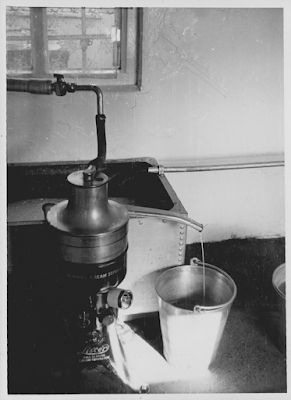 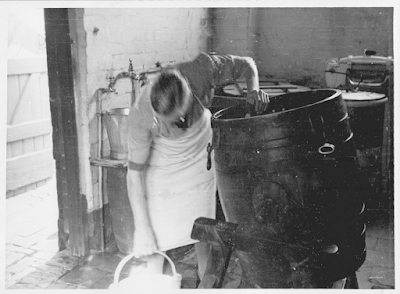 The cheese is then pressed: 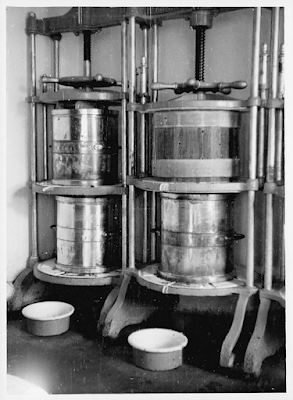 and bound in cloth: 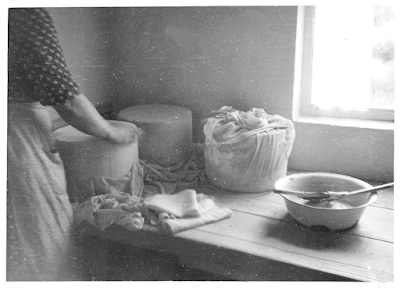 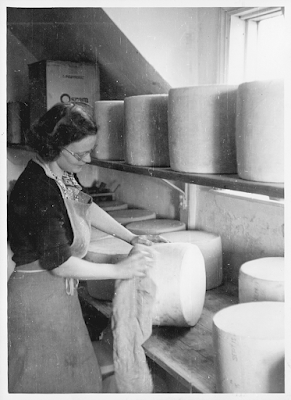 Nothing is wasted and the next picture shows the whey being fed to the pigs: 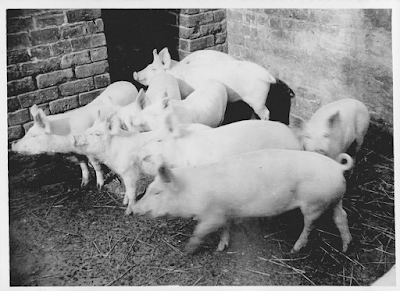 Looking through the album it's clear that there's a great sense of pride in the whole process. The last photo show the result- farmhouse Cheshire cheese: 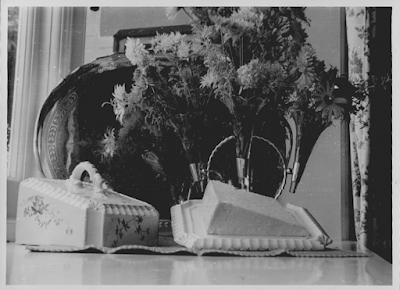 In the back of the album there's a couple of colour pictures from 1970. One shows a cow in the milking parlour: 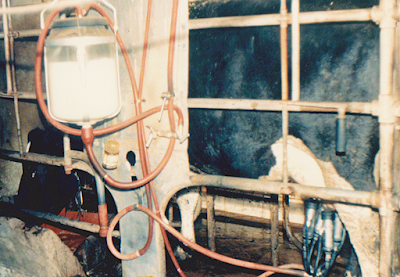 and another of cheese being bound in cloth: 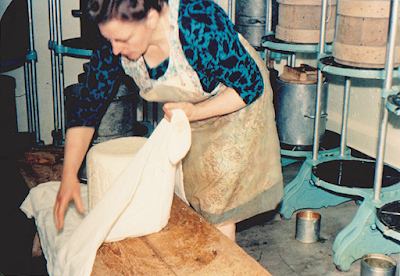 I had the privilege of meeting Lance and Lucy, and think they were both quite remarkable people.  Their family still make Cheshire cheese at Hawkstone Abbey (see here for more information) and in my opinion it's the best Cheshire cheese that you can buy - even if it is in Shropshire!